[TL;DR version: I’m fine, but we all need to be better] 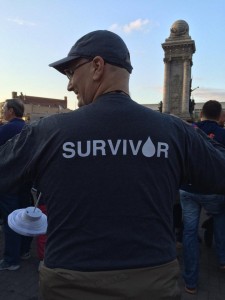 My good friend and colleague Jill Hurst-Wahl asked me to write a bit about my current state of health. I think she is tired of letting folks know I’m fine now, have been doing some travel, and not stuck in a bubble. I feel like I have said this, but have probably not put it in one succinct post. So…

I’m fine. I had a cancer free PET scan in June, and then another clean one in September. In three months I’ll have another scan, and then more after that as my oncologist follows-up. While there is no guarantee that the next scan will be clean, or that the one after that will be and so on; no one is promised a day on this earth, so I will take the bliss of cancer free for whatever period I’m given before a scan. For those keeping track 50% of transplant patients remain cancer free for 5 years.

I am not, in fact, living in a bubble. Yes, I am immune compromised and will be so for a few years. This is in part because I have a brand new immune system and partly because I have yet to get re-vaccinated for things like polio, and whooping cough (that re-vaccination happens in an accelerated fashion after 1 year). However, I have a working immune system that apparently does well with viral infections, but is more vulnerable to pneumonias (imagine how pleased I am to follow the recent news with Ebola and the Enterovirus).

I also have to be very careful with food born illnesses. Anyone would have problems with things like Salmonella and Listeria, but I would have a VERY hard time with them. So food needs to be served well done and hot. I also have to avoid buffets and food that has been sitting under heat lamps. Really folks, we should all avoid those…have you seen what people do at salad bars?

I also have, in fact, done a bit of traveling. I’ve done a few trips to Albany, to Fairfield Connecticut, and later this month I’m actually flying to Springfield Illinois to join my tribe at ILEAD USA. My doctors have given me the go ahead to get on planes as long as I wear a mask and douse myself in hand sanitizer. I think this is to freak out my fellow passengers so they give me more space.

I’ve been limiting my travel to mostly places I can drive to. This is really out of an avoidance of getting back in planes (those damn things shake in the air) than health issues. However, I am thrilled to announce that I have accepted speaking gigs in Liverpool (UK), Australia, and New Zealand. I’m also working on putting together a speaking tour through Italy in the summer (hey…want to host an academic in Italy this summer? Let me know). I’m also working on an idea to get me to ALA Midwinter in January.

Which brings me to a very weird spot. It would be very easy to fall back into a life of the traveling professor. I am teaching an amazing class of LIS students. I have offers to speak. I have a lot more to say on the future of librarianship. In essence, I have the incredible good fortune of being able to pick up my life where I left it before cancer.

So should I? As I have been recovering these past months I have seen a community I love, librarians, both profess noble principles (diversity, respect, concern for the well being of their communities, a call for greater service) and engage in the worst kind of pettiness, to the point of lawsuits and character assassinations. Do I really want to give more keynotes when the speaking contract seems to come with a target for my back?

I have read your posts and your Tweets, and there are some great ideals expressed. Those with more attention, or more opportunities have a responsibility to bring along those around them. Yes. Those who live with cancer, who survive, teach. They teach their parents, and their kids, and their friends, and their co-workers. They teach because every cancer survivor knows they are alive because of the work and suffering of those who came before. My bone marrow transplant was a success because of literally thousands of people who died before me, hundreds who were willing to be a lab rat for new treatments, and doctors, researchers and nurses, who refused to stand by and allow more death. We teach, we write, we appear hairless on magazine covers because we have learned that every day without nausea or pain is a gift, and one that we must share for those who will come after us and need hope.

In the cancer club a 9 year old becomes famous…he or she inspires blood drives, and scholarship funds, and the building of new cancer centers. They are famous not because they “did cancer the best,” but because they can inspire others to action. Every rock star with cancer is reminded every day they are there, they are worthy, they are important not by autographs requested, but by platelets donated. Every cancer patient knows that in their veins course the immune system of others, their cells breathe due to red blood cells from across the nation.

I am shiny, I am a rockstar librarian, and people invite me to give keynotes…and when they do, I am keenly aware that I am there because of the work of mentors like Mike Eisenberg and Chuck McClure. I am there with the support of people like Liz Liddy, Corinne Hill and the wisdom I have drawn from Meg Backus. I am speaking because Lane Wilkinson took the time to argue epistemology with me; because Jill Hurst-Wahl lets me snark over lunch. I am there because of Mike Nilan, and Andy Dillon, and Kathryn Deiss, Scott Nicholson, Megan Oakleaf, Kim Silk, Wendy Newman, Nicolette Sosulski, Joe Janes, Barb Stripling, Ruth Small, Jeff Katzer, Todd Marshall, Anne Craig, Gwen Harrison, Joe Natale, Mick Jacobsen, Andy Bullen, Steve Thomas, Buffy Hamilton, Joyce Valenza, Joe Ryan, Bill Moen, Joanne Silverstein and an entire nation of genius. I am there because of Melvil Dewey, Ranganathan, Wilson, Buckland, Pask, and Taylor. I am there because my wife took the effort over two decades to beat out of me the misogyny that the Jesuits in high school used to push me forward. I am there because every year I get a sea of fresh faces of LIS students who push me further. I am there because of Mia, and Lauren, and Carl, and Bob. I am there because the librarians of Ferguson and Alexandria did their jobs in the face of uprisings, and the librarians of Fayetteville took a risk of 3D printers. And when I am at a conference, at work, on the Internet, or frankly anywhere, I behave with respect for myself and others because of those I represent.

I don’t think we need to get rid of Movers & Shakers. I don’t think we should get rid of Think Tanks, or Emerging Leaders or any awards that give librarians an opportunity to showcase how great librarianship is to the world around us. Do you think those awards are for librarians? Do you think these awards should be about self-congratulations or creation of a class system, or pushing one above the many? Do you think we place folks on pedestals for us to admire them? If that is the case, then tear them down. We must use all of these pouts of distinction as ways to scream to those that we serve that we are here, we are important, and we only succeed in the success of those we serve.

So be shiny and a rockstar and a leader. 3,000 years of librarianship are here to push you forward. But shine to your members, rock the worlds of your communities, lead the world to better days. That’s what I’m going to do with my gift of life…what about you?