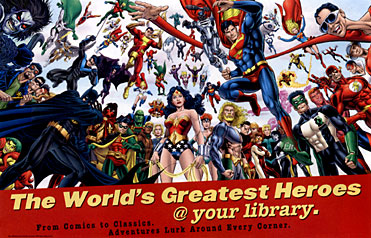 [I’ve edited this post to remove a pointer to the tweet that set me off. It was pointed out correctly that the way my thread was a response to a person instead of making the point generally was unfair to the original person who tweeted].

So today I kind of went Twitter crazy and I thought it would be useful to share my thoughts for folks who are not on Twitter. Particularly for those who have left Twitter because it seems to a place where negativity rules in library land.

It started with a tweet about people who were recognized as Movers & Shakers by Library Journal. There has always been a love hate relationship with this list. The primary complaint is that there are plenty of folks who innovate and do fantastic work in librarianship not recognized on that list.

Here’s my reply to one of those posts (with a little editing for typos):

Know several who are still doing good work. I’ve never understood the need to tear down folks who get recognized in the profession. Just because they get called out doesn’t depreciate the great work everyone else does.

You don’t like the project, fine. The person makes bad professional choices, call them on it (as many have done with me with very legit issues). But we are a profession that is supposed to be about service and community support.

Some of these folks have been my students. Some my colleagues. Some friends, and many I don’t know. Still they are people trying to do good work…like we all are.

I love the question, have they burned out. Not because I hope they have, but because it begs the question how can we as a profession ensure folks don’t.

If we make recognition, no matter how dubious we may feel the source, a factor in burning out, what does that say about us as librarians?

On that list are there folks that seek out recognition? Sure. Are there people who flaunted the award? Sure. There is also a cancer survivor who risked her job to fight for labor rights. A school librarian who every day supports the most vulnerable students.

A professor who lost her home in a hurricane and still everyday advocated for broadband in too often forgotten rural populations.

A librarian in the deep south bring a community together to have a serious conversation on race.

We talk about libraries transforming and becoming community hubs. As a profession we too are a community. That means we have issues that need to be addressed frankly like race and inclusion.

That only happens if we feel safe in talking. Confront me when I screw up. Many folks have. It hurts, but when I deserve it, it should hurt. But don’t confront someone because someone else pays them respect.

I’ve talked to some of those Movers and Shakers after the award and many feel it’s like a scarlet letter. That makes me sad. We as a profession that proclaims improving society should feel joy for the recognition of others.

The elevation of one should be the elevation of us all. I’m tired of flinching every time I open Twitter. I want it to be a place that I learn from. Even if that is learning from my mistakes. It shouldn’t be a place we run from fearing our backs.

To be clear Twitter can be a powerful force in librarianship. It has called out the profession on powerful issues like race, hate speech, neutrality, fair labor practices, and vocational awe. It has been a place where serious topics like the philosophy underlying the field have been discussed. It has and can act as a sort of shared LibGuide on important topics. It is also a place where ad hominin attacks happen.

If we seek to facilitate knowledge in our communities – giving voice to a community with equity, we need to practice this among ourselves. This isn’t a call for civility in the sense of suppressing negative views or serious disagreement. It is a call for using platforms to invite fierce and powerful conversation that doesn’t punish people for sharing their ideas.

Then I decided to share some of the librarians and supporters of librarians that have been so vital in my career using the hashtag #MyLibraryHeros (yes, I now realize I misspelled heroes). As I said in a tweet “This list is only a start, and if I’ve misspelled a name or not listed you (yet), know that you matter.”

#MyLibraryHeros Just a few of the folks who I admire and learn from in library land. Most librarians, several “librarians by spirit.”

#MyLibraryHeros OK, a partial list at best, but I need to take a shower and get on a phone call. Who are your library heroes?