I wrote the following post for the iSchool’s Information Space Blog. Thought folks here might find it useful.

Can I tell you why I’m so excited about Amazon’s Kindle Unlimited service? Because, aside from all my publications with academic presses and journals, I am an independent publisher. My book, Expect More, was published as a physical copy and digital copy through Amazon’s tools. What’s better, I’m automatically part of Kindle Unlimited, and maybe this will get me more readers. You see, the vast majority of the 600,000 titles in Kindle Unlimited are self-published books.Want the top sellers in the New York Times list? Ah, go to a library.

Surprised that a professor of library and information science isn’t all that worried about the fate of libraries (mostly public libraries) in the light of Amazon’s Kindle Unlimited launching it’s “Netflix for Books?” Don’t be. Amazon joins a pretty crowded field, including Overdrive,Scribd, and Oyster. What’s more, Amazon is leading with 600,000 items, where libraries have access to tens of millions of titles…seriously.

Perhaps, you may think, I am an ivory tower academic blind to the coming disruptive change…like when the Internet was going to put libraries out of business… then Google…then Netflix…then Yahoo! Answers. Here’s the plain truth: there is a HUGE disruptive change happening in libraries, and it is facilitated by things like Google and Kindle Unlimited. Libraries are shifting from collection-focused buildings to centers of innovation focused on communities. If you think of libraries as places filled with books, you are in for a bit of a shock. Any library that can be replaced by a $10 a month subscription to stuff SHOULD be replaced.

Kids at the Fayetteville Free Library watch a 3D Printer in action. Image via 3ders.org.

Let me give you a small example of what I mean. My wife recently had to be out of town for 2 weeks, so I got single-father duty. The majority of those days we were at the library. We were there so the kids could 3D print iPhone cases for their friends, borrow games, and join Minecraft groups. Did they check out books? Sure, on our way out…if we had time. Why was the public library doing all of these things? To meet the library’s mission of improving their community through knowledge creation. My kids were learning through books, sure, but also video games, Do It Yourself (DIY) printing, and by interacting with other folks in the community. In the coming weeks, the same library is having DIY sessions on home improvement, including electrical work…I NEED that.

Now, this might seem a flippant response to a major technology mover. After all, was there nothing in Amazon’s move that worried me? Oh yes…hell yes if I’m allowed to swear on this blog. It terrifies me and should terrify you how Amazon is currently working to break publishers and pursue a monopoly in book sales. They are making information unavailable to their customers trying to improve their position in the market. They are making titles harder or impossible to find out of a drive to the bottom line, not the good of the people. 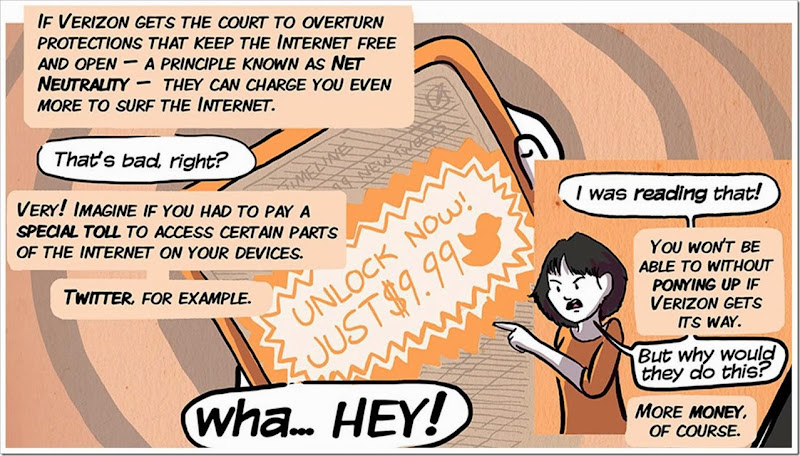 An example of the consequences of the end of Net Neutrality. Image via commoncause.org.

But honestly, that is nowhere near as scary as things like network neutrality, where Internet Service Providers are trying to figure out how to monetize your viewing habits and pick the winners and losers in new Internet services. And that, frankly, pales in comparison to digital sharecropping, where huge corporations get massive billion-dollar valuations based on the content and work of their “users.” I mean, who is using whom when YouTube gets bought by Google for over a billion dollars and not one video producer saw a dime?

So are there scary things going on? Yup? Thank God we have some folks who are in the information industry and base their work on century-old values.Thank goodness there are information professionals that continue to maintain an internationally-distributed network of local knowledge hubs dedicated to community engagement and free and fair access to the life blood of democracy: information. Thank goodness there are librarians who long ago realized that it is not the size of your collection, but the reach of your community that really matters.

By the way, if you have $10 a month lying around, try Marvel Unlimited. If you are a comic book fan it is fricken incredible.